The University of Bremen aged 10 years and the establishment of an engineering faculty "production engineering" was heavily discussed at the politically induced reform university. Exactly at that time, the “Bremer Institut für Betriebstechnik und angewandte Arbeitswissenschaft” (BIBA) was established as the first affiliated institute of the University of Bremen. Today it is among the largest institutes in Bremen and is celebrating its 40th birthday these days.

BIBA owes its existence to active visionaries from science, politics and administration who committed themselves to the establishment of the faculty of production engineering as well as for the founding of an "affiliated production engineering institute". Controversially discussed over years, in 1980 finally this matter gained momentum.

BIBA was Launched with the Research Project "Schiff der Zukunft"

At the end of 1980, Bremen established the "Verein zur Förderung der wissenschaftlichen Forschung in der Freien Hansestadt Bremen e.V." (VFwF), which created ideal conditions for the founding of affiliated institutes. Affiliated to the university they should easily apply for funding opportunities and enter into research cooperation with the industry. At the beginning of 1981, the "Bundesministerium für Forschung und Technologie" signalled to fund the research project "Schiff der Zukunft" which included around eight million Mark and Bremen created the appropriate framework to this end.

End of June 1981 the VFwF executive board determined the Articles of Association of BIBA and the new institute, headed by Prof. Dr.-Ing. Holger Luczak, officially started its work on July 1st, 1981, with the research project "Schiff der Zukunft". It was the following year that the faculty of production engineering was founded.

After the founding professor Luczak had left BIBA, the management was taken over by Prof. Dr.-Ing. Bernd E. Hirsch, appointed professor of the field of production systems (1984) of the new faculty production engineering. He seized the opportunity to apply for new projects and to attract research funds.

Rapid Growth and Relocation to Own Building

In its early years, BIBA was spread across several buildings on the campus, such as university depot and “Bremer Innovations- und Technologiezentrums" (BITZ), later as well in "Engineering Sciences I" and additionally in containers. Obviously, the institute needed its own building and it was planned to invest around 350 million marks of which 24 million were scheduled for a new BIBA building.

Star architect Oswald Mathias Ungers could convince with his design and won the contest. The Weser-Kurier headlined "A semicircle of glass surrounded by offices" and described BIBA as “half a building”. The new building at Hochschulring quickly became known as "half a cake". The roofing ceremony in March 1991 was followed by the opening on October 7th, 1992. In 1998, the university campus was connected to the tram network which was another success for the internationally very active research institute as they now benefitted from a door-to-door connection to main station and airport.

On its 10th birthday, BIBA was given a new building – and also a headline in BILD newspaper. In November 1991 the paper honoured the anniversary with the headline "Ten years of BIBA" amongst two news blocks "Serious accident – 2 deaths" and "Bomb blown". By that time the institute already employed 130 people and further growth was expected. Renowned production engineers characterized the institute and considerably contributed to the success of the institute

In 1992, BIBA director Prof. Dr.-Ing. Bernd E. Hirsch received support: Prof. Dr.-Ing. Franz J. Heeg, who now held the professorship for Industrial Science at the faculty of Production Engineering, joined the institute's management. In 1998, Prof. Dr.-Ing. Gert Goch (Field of Measurement and Control Engineering) joined the team, followed by Prof. Dieter H. Müller (Field of Design and CAD) in 1999 and Prof. Dr.-Ing. Bernd Scholz-Reiter (Field of Planning and Control of Production Engineering Systems) in the year 2000. Five institute directors with five complementary BIBA research areas now determined the skills of the institute. In 2003, Prof. Dr.-Ing. Bernd E. Hirsch retired and was replaced by Prof. Dr.-Ing. Klaus-Dieter Thoben (Field of Integrated Product Development). After Prof. Scholz-Reiter's move to the rectorate of the University of Bremen in 2012, Prof. Dr.-Ing. Michael Freitag (Field of Planning and Control of Production Engineering and Logistics Systems) joined the institute's management. BIBA had established itself and meanwhile managed also large European and nationally funded joint and key projects, while being successfully involved in teaching. The education should be thrilling with practical attitude. The exceptional courses at BIBA repeatedly attracted great media interest and were highlighted as exemplary successful training formats by the German Academy of Science and Engineering (acatech). The students developed, for example, single-cup dishwashers, surfboards with auxiliary drives or two-wheeled service robots and finally presented their work in front of large audiences.

The Concept has Proved Itself and was Continuously Developed

With the foundation of the institute, Bremen wanted to promote its high-tech location. The concept was a success. With an annual output of 7,6 million Euros (2020) BIBA is among the largest research institutions here in Bremen. Focus is still the holistic view of production and logistics along the entire supply chain, the inter-disciplinary and inter-institutional cooperation as well as the transfer to industry and society. This is evidenced by the various long-standing cooperations - whether with small and middle-class local companies or with global companies. The institute is firmly rooted in the region and operates globally

BIBA researcher always have the right feeling for new topics, needs and trends. Starting point was the project "Schiff der Zukunft", followed by developments on Computer Integrated Manufacturing (CIM) and, among other things, on circular economy, environmentally compatible products and resource-saving production and logistics processes, also on electro mobility and the use of wind energy, up to complex product systems, automation in intralogistics incl. human-technology interaction, self-control in logistics up to Industry 4.0.

Production systems and logistics networks are becoming more and more complex. Conventional processes reach their limits and their planning demands interdisciplinary and holistic views. This is the strength of today’s BIBA. Together with the changes in the research foci in 2007, BIBA was re-branded in "BIBA – Institut für Produktion und Logistik GmbH".

Today, a total of around 150 people work in the two research areas "Intelligent Production and Logistics Systems" (Freitag) and "Information and Communication Technology Applications for Production" (Thoben), as well as in the associated university departments "Planning and Control of Production Technology and Logistics Systems" and "Integrated Product Development". They are involved in basic research and application-oriented development projects. For example, BIBA was involved in three special research areas (SFB) of the Deutsche Forschungsgemeinschaft (DFG), including a leading role in SFB 637 "Self-control of logistic processes". Close organizational and content-related connection also exist with the research association "Bremen Research Cluster for Dynamics in Logistics" of the University of Bremen, the "International Graduate School for Dynamics in Logistics", the competence and application center "LogDynamics Lab" and the "Institute for Integrated Product Development" (BIK).

In addition, BIBA has an outstanding research infrastructure: in the research hall, concepts and methods are being developed to visible solutions in which product and process are integrated in production and logistics in the spirit of digital transformation. In this unique constellation, BIBA researchers, together with their partners from industry and science play an important role in the future of production and logistics. 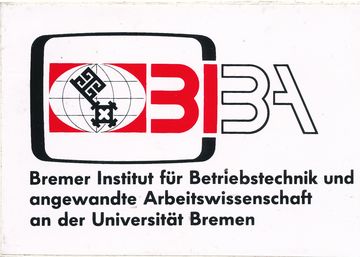 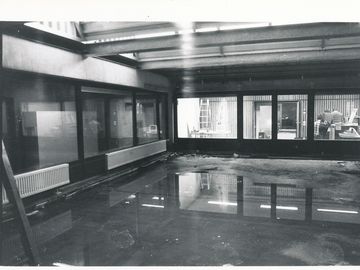 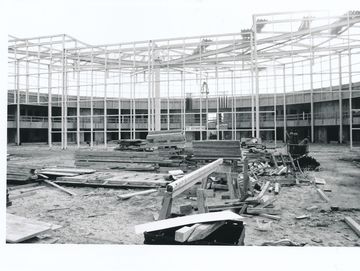 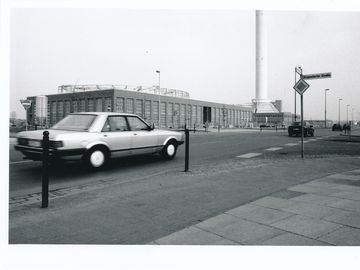 click to view enlarged
Roofing Ceremony Image 3
Already during the construction phase BIBA caused a sensation. “A semicircle of glass surrounded by offices”, was the headline of Weser-Kurier and described it as “half a building”. (Photo: Uni Bremen) 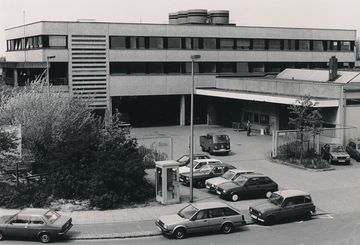 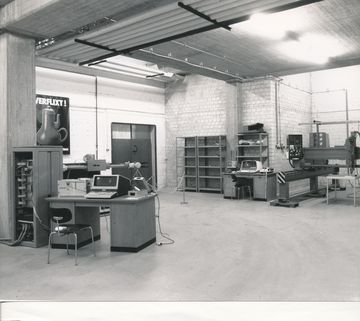 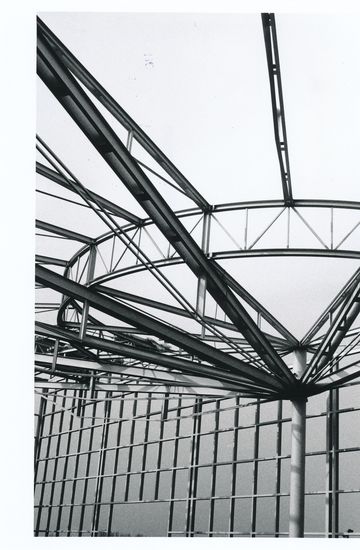