Visit of the Ethiopian Ambassador to BIBA 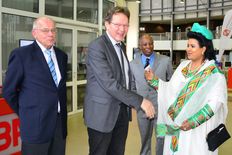 The new Ethiopian ambassador in Berlin, Mulu Solomon Bezuneh, visited LogDynamics and BIBA on November 26th. The Ambassador paid particular attention to the International Graduate School for Dynamics in Logistics (IGS), as IGS has supported and supervised more than 20 doctoral students from Ethiopia in a variety of ways in recent years. The first doctoral student was Fasika Bete Georgise. He received his degree in production engineering from the University of Bremen in 2015 and has been teaching at his home university Hawassa ever since. At present, two Ethiopian doctoral students with a so-called sandwich scholarship are at the IGS. They spend three semesters each of their scientific research at the University of Bremen, but receive their degrees at their home university. The largest group to date consisting of 18 Ethiopian lecturers completed a three-month stay abroad at BIBA with the support of IGS. In a project of the Texas Tech University, USA, together with the Bremen-based company INROS LACKNER SE, they were given access to scientific resources and practical experience.

All these doctoral students are already lecturers at their home universities. The goal of their stays abroad was and is to bring the education and research of Ethiopian universities to an international level and to learn from best practices. The Ethiopian government has launched various measures and funding instruments for this purpose, which are being implemented with German support, e.g. by the German Society for International Cooperation (GIZ) GmbH and the German Academic Exchange Service (DAAD).

During her visit, the Ambassador gained her own impression of the existing infrastructure in the BIBA Research Hall. She also took the opportunity to discuss the experiences and possibly necessary changes with professors, with the IGS coordinator and with the two Ethiopian doctoral students. The ambassador's visit was initiated by a former BIBA employee, Tesfaye Balcha, and coordinated with the participating institutions. He is currently actively involved in the community of Ethiopian and Friends of Ethiopia in Bremen.